David Frangioni, a music technologist and drummer who has worked with many of the world’s biggest rock artists including Aerosmith and Ozzy Osbourne, talks to Jason Barnard. Additionally, read on to see how to win a copy of Dave’s book CRASH: The World’s Greatest Drum Kits From Appice to Peart to Van Halen.

What’s your background and how did you get involved in music?

I started playing the drums around age two. At the same age I was diagnosed with retinoblastoma (cancer of the eye) and found music as my refuge and never looked back.

When did you first hear about MIDI and what attracted you to it?

I found MIDI as I was searching for ways to implement electronic drums into my drumming setup. I was on a pursuit to become the world’s greatest drummer and understanding electronics as it pertained to drumming, was important, especially in the mid-80’s when all of this was new. It turned out that I had a passion for technology that was as strong—or even stronger—than playing the drums! It all fit together, knowing how to read and compose music, play the drums/percussion and then integrate all of it with music technology.

How has MIDI shaped the music industry?

It transformed music by providing a set of tools that forever shaped how music will be composed, captured, edited and ultimately released. It’s truly prolific technology.

What led you to being Aerosmith’s in-house engineer/technologist from 1989?

I was contacted by Tom Hamilton, their bass player, and he introduced me to the band. I hit it off really well with Steven, Joe, and the guys and we started working together in 1989. 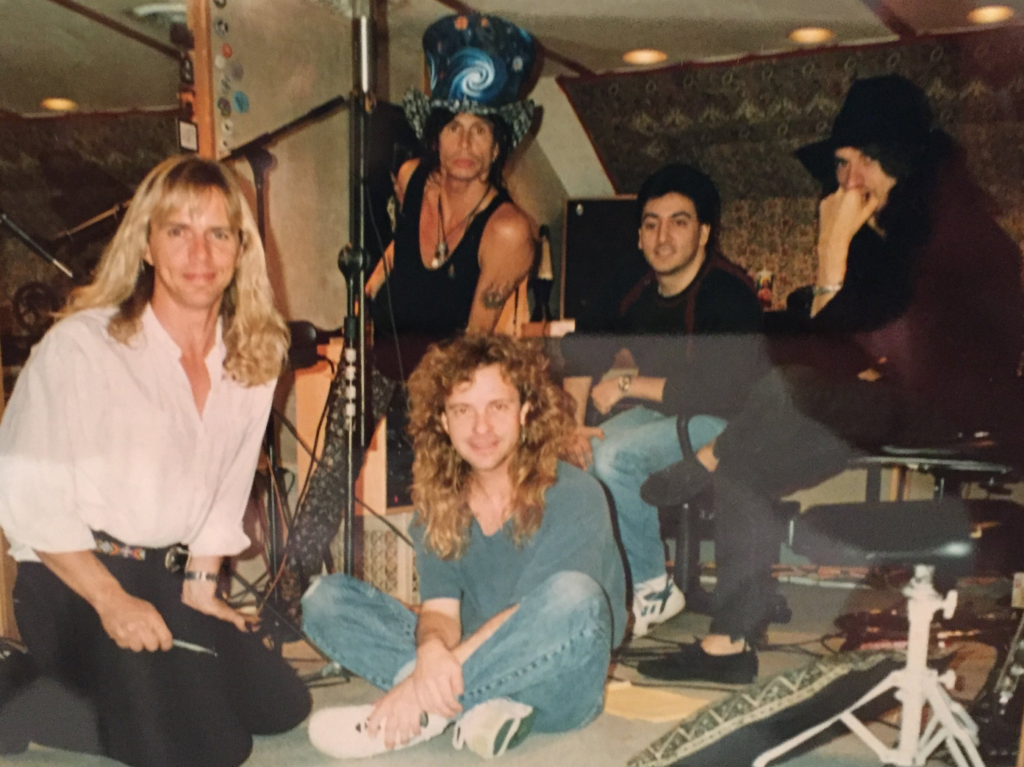 Can you describe your role in that period? Can you give me an insight into the production process behind Aerosmith’s music at the time?

I was the one-man-show in-house for the band, mostly Steven and Joe, running the console, computer, editing, recorders and all things that were happening in the studio during the songwriting process and for a few of the albums, the entire process.

Do you have any favourite tracks that you were involved shaping and why?

Cryin, Janie’s Got a Gun, Crazy, Love in an Elevator, Falling in love is hard on the Knees, Walk on Water. So many memories of those songs being written, created, born from ideas to finished tracks, then becoming hits. It was a time of incredible growth and creativity for the band and I was so honored and fortunate to have been apart of it.

I’ve heard you were involved with Ozzy Osbourne and The Osbourne’s TV show – what did you do and what was it like working with Ozzy?

I built two studios for Ozzy over a period of six years and while working on the first one, the Osbournes was being filmed for Seasons 3 & 4. I was in a few episodes when Ozzy was working in the studio with Mark Hudson and me. Being around the family and on the show was incredibly fun! Ozzy, the kids and Sharon are such wonderful people and always treated me very nicely. It was another period of lifetime memories.

You’ve worked with hundreds of other artists – what’s your principal roles in this work and what have been your highlights?

My role has varied so much because, for better or worse, I wear a lot of hats and enjoy doing different things that all connect together in their own unique way inside of me. MIDI programming, building entire studios and facilities, engineering, producing, drumming/programming, editing, mixing, sample & sound design. I love doing it all and learning more every day. Having been able to do it for the Stones, Elton John, Sting, Bryan Adams, Mutt Lange, Ringo Starr, Shakira and so many other great artists has been a dream come true.

Do you have any memorable or funny stories in your time in the music industry?

Hundreds literally! As you would imagine by my being with creative geniuses and very big personalities such as Steven Tyler, Ozzy, Ricky Martin, etc. I remember one time I was sitting at the console with Ozzy and the mouse kept freezing. Ozzy said to me: “David, what’s wrong here, why are things moving slowly?” I said, “Don’t worry, Oz, it’s just the mouse, we’ll get it sorted.” Ozzy, without missing a beat, says “well then F^&% it, GET A RAT!”

What inspired you to write Crash – The World’s Greatest Drum Kits From Appice to Peart to Van Halen? Can you tell me more about this and which drummers you worked with on this book?

I wanted to share my drum collection with the world and create the book that I would want to read—one that has amazing photos of amazing kits that you could enjoy even if you looked at the photos without reading the text. This book is my love and my passion I want to get this in the hands of as many people as possible. I also regularly do free giveaways for the book because I always believe that the best way to get is to give. Not many people can make it down to Florida to see my drum collection and this is the next best thing.

What are you current projects and priorities for the rest of the year?

Lots of growth and even bigger projects like designing, engineering, and installing sound systems for large-scale facilities and venues. I also have some amazing things in the pipeline to announce soon, stay tuned!

Thanks David – much appreciated.

To win a copy of Dave’s book ‘CRASH: The World’s Greatest Drum Kits From Appice to Peart to Van Halen’ please enter here.

A Match Made in Heaven?