When producer, engineer and music technologist David Frangioni sat down to compile his newest book, Crash: The World's Greatest Drum Kits From Appice to Peart to Van Halen, he knew he needed to include two people: iconic drummer Carl Palmer of Emerson, Lake & Palmer and KISS drummer Eric Singer. Luckily, he managed to get them to write the book's introduction and conclusion, respectively.

Crash, the 207-page illustrative book, features an up close look at the most famed drum kits in the history of rock’n’roll. The detailed images and text highlight the design behind the drums of bands such as The Beatles, Aerosmith, Iron Maiden, Rush, Metallica, Journey, Black Sabbath and more. It's like a high school textbook filled with a timeline of rock percussion.

For fans of KISS, the book comes fully loaded. Aside from a section dedicated to the band’s founding drummer Peter Criss’ 1976 Destroyer set-up, Crash features a ten-page spread featuring three of Eric Singer’s most legendary drum kits. Singer — who started playing alongside KISS in 1991 — is about to embark on the band’s End Of The Road tour.

Singer and Frangioni grew a friendship through both music and charity. In fact, many of Singer’s drum kits reside in Miami at the Drum Experience Center, a museum-like facility where kids in need learn to play. The center is a division of the Frangioni Foundation, which is directly receiving a portion of the sales from Crash.

Below, David Frangioni and Eric Singer discuss the drums that revolutionized music, a drummer’s expression and KISS kits past, present and future.

What was your approach to compiling this book?

Frangioni: It’s a celebration of drums, drumming, the drummer and the eras that these kits were a significant part of. Drums are one of the rare instruments where you can see a kit and it has an impact on you before you even hear it.

I really wanted it to be picture driven, so that people could enjoy the kits as if they were walking around a museum. For people who are more of a drum geek, they could dive in a little deeper.

Why do drums deserve such attention to detail?

Singer: The great thing about drums, they’re a very personalized instrument. Not that you can't custom paint a guitar or have a body of a guitar cut to a certain shape. But the thing about a piano or guitar, they generally have they the same amount of keyboards, keys, frets or strings.

Drummers can set up a kit to physically suit their needs, based on the fact that we're anatomically built differently from each other. I'm 5'6", so I'm gonna set up the drums to suit my physical stature.

Some people want to express themselves on just three or four drums. Others want 10 or 15. That individualism is expressed throughout the book.

Which drum kit excites you the most in this book?

Singer: To me, the real center piece of that book is probably Carl Palmer’s Brain Salad Surgery stainless steel kit. It’s a work of art.

It was a pure expression of somebody having a vision and having it realized. It wasn’t even a drum manufacturer that made the drums. Every aspect was custom. 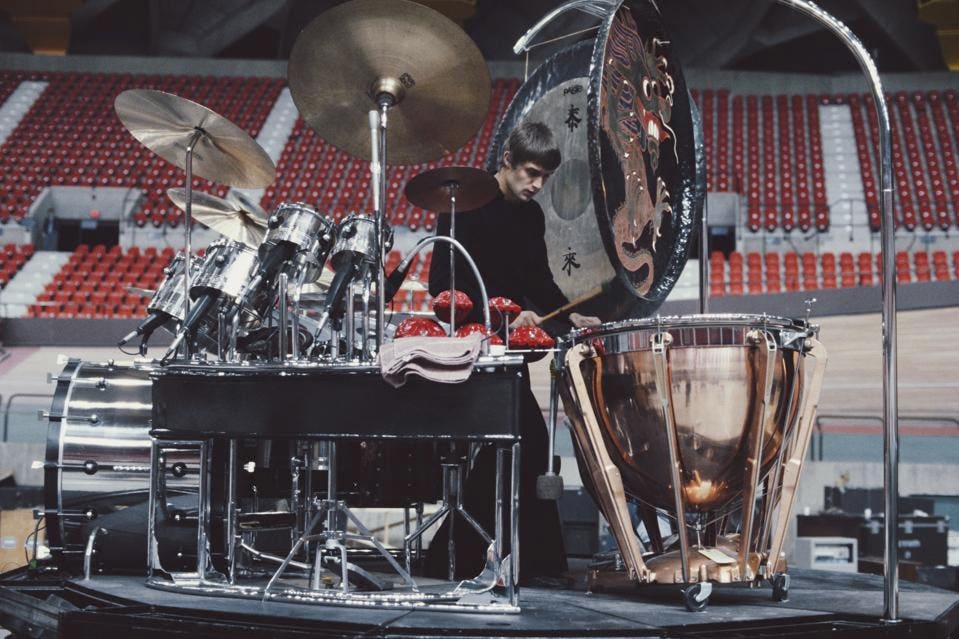 Carl Palmer was one of the premiere drum heroes, especially in the early to mid 70's, until Neil Peart from Rush came along. Then he became the next guy of those progressive rock drummers. But, Palmer was the guy, he was innovative.

He was one of the first to use electronics, the most primitive form of drum synthesizers. Emerson, Lake & Palmer was a visual band. They presented their show with lights and synthesizers. Not only on Keith Emerson's keyboards, but Palmer incorporating that as a drummer was the first time I saw that. 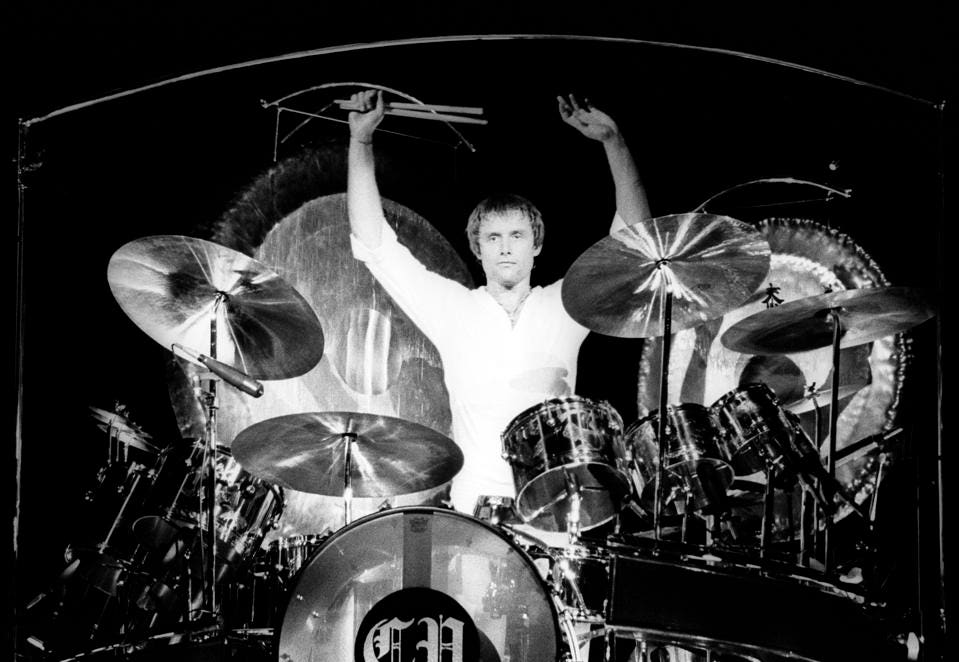 Carl's approach was not just about a rock show. That's when prog rock was at its biggest. You had Emerson, Lake & Palmer, Genesis and Pink Floyd. They could all play 20,000 seat arenas. I saw ELP, 75,000 seats at Cleveland Stadium, when I was a kid in 1974. That was a special time. To me, that kit is the end all be all of that period. It’s one of the most unique iconic kits ever made in the history of drumming.

Eric, your mirror ball kit is prominently displayed in Crash, would you say that’s also one of the more custom kits ever made?

Singer:  That was inspired and influenced by people that had done it before. The first time I saw somebody do a mirror ball kit was Alice Cooper on the Billion Dollar Babies tour in 1973. And then KISS in 1975 on the Alive tour. Triumph from Canada, the drummer Gil Moore also had a mirror ball kit. 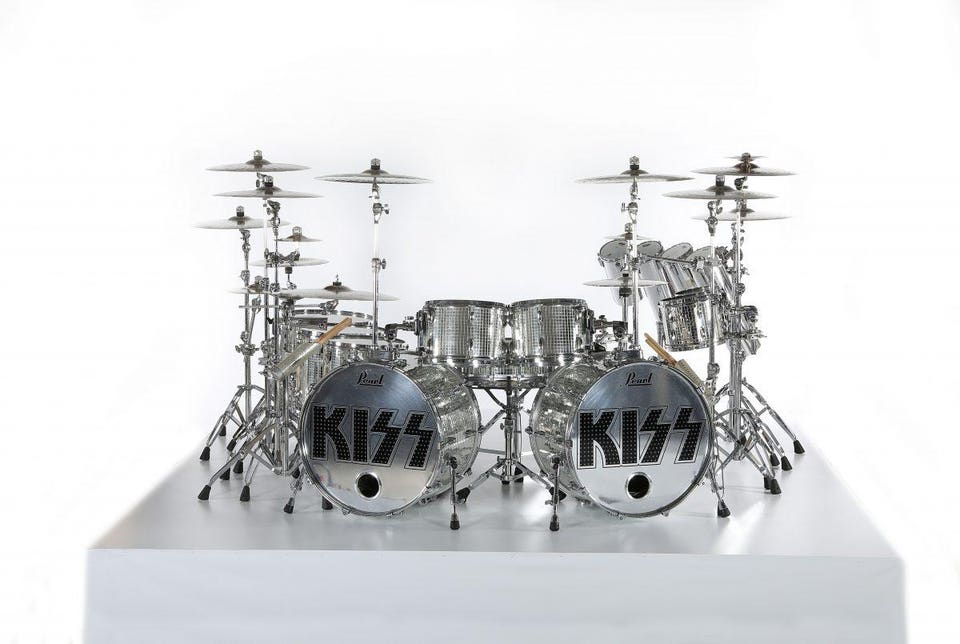 So, it had been done a few times. I remember as a kid thinking, "Wow, how cool!" The great thing is, sometimes you're fortunate enough to end up in a position where you go, "Hey, now I can realize my dreams. I can make the kit that I always wanted.” Every aspect of my kit was custom made. You have to be right on top and have all the details pointed out to appreciate that aspect.

Your drum kit is an extension of yourself. It’s not just how you play, but how you want to be seen and perceived.

Eric, what is the biggest kit you’ve ever played on?

Singer: David has one of my old kits, which is an acrylic clear kit with the lights inside. That's the biggest kit I ever played in my career.

It was from KISS Las Vegas 2014. Because I liked it so much, I ended up using it for some other KISS tours after that. When you think of Las Vegas, what do you usually think about? Elvis, Liberace, classy, big and over the top.

It had LED lights built into it. They were synchronized and incorporated with the lighting rigs. So, the light designer, if he was going for a color scheme, if he wanted everything blue, the drums would be lit up blue as well. He had full control throughout the show. 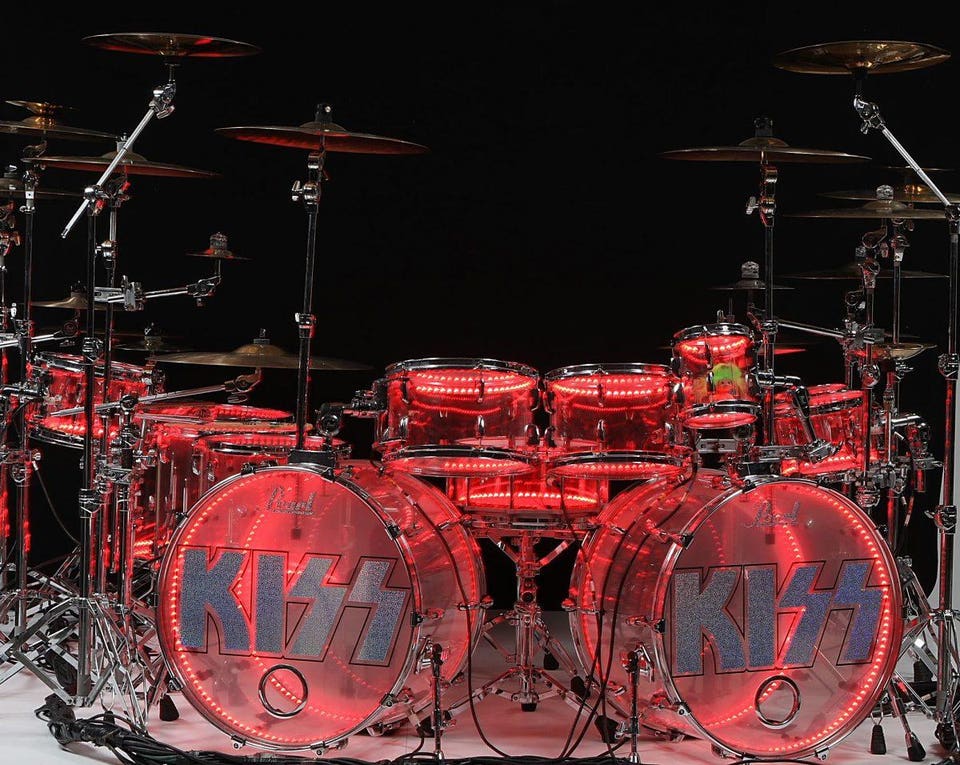 There’s one photo in Crash that shows you on this massive drum riser. Are those somewhat foolproof or is there always a bit of a risk factor to them?

Singer: We've had two types. There's one that attaches to the corners of the drum riser on motorized chains. When it goes up, that thing is just swinging around. We've had times when one of the motors got out of sync and the thing started going cockeyed.

I’ve felt a couple of times the drums were gonna go off. They were not bolted down. If that thing goes sideways, those drums will topple off that riser.

I'm thinking, "What's my exit plan here? What am I gonna do? I'm gonna have to grab on to one of those chains." And those chains are full of grease!

The other type of riser we used was like a scissor lift. That one is probably more safe.

What’s cool about this book is that you can see drumming evolve as popular music has. Did you try to work in historical context that way?

Frangioni: As the times have grown and the shows have gotten bigger and the music has changed, drum kits have gone along with it.

If you look at Keith Moon in the 70s where he'd surround himself with drums. There are iconic shots of him playing that white Premier kit. He looks like he's in a sea of drums. No one ever really did anything before or after that which had that look.

Previous to that he had an iconic kit called, “Pictures of Lily,” in the late 60s. It had all these artistic paintings. It’s incredibly famous among drummers and The Who fans. The kit was disassembled and there's one piece here and one piece there. But Premier did a tribute kit in 2006. If you look at Neil Peart's R30: 30th Anniversary World Tour kit, he says, "I got my inspiration for this kit from ‘Pictures Of Lily.’" 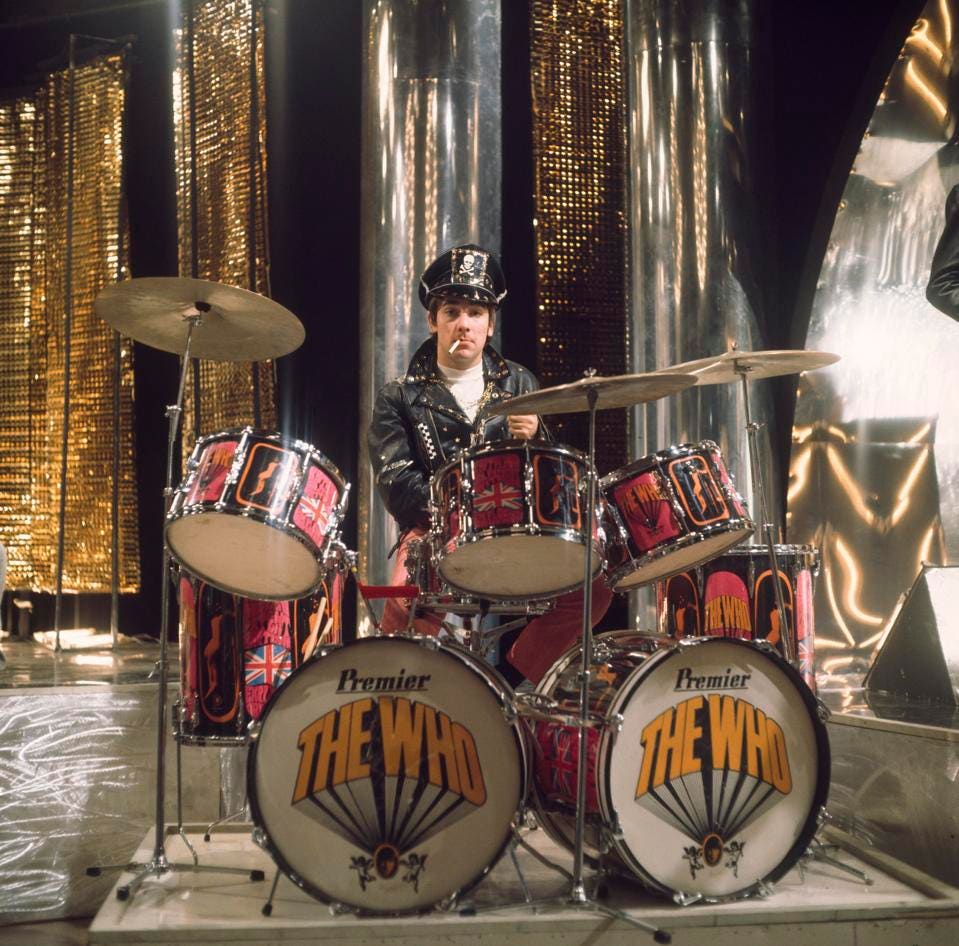 Keith Moon with his "Pictures of Lily" kit. 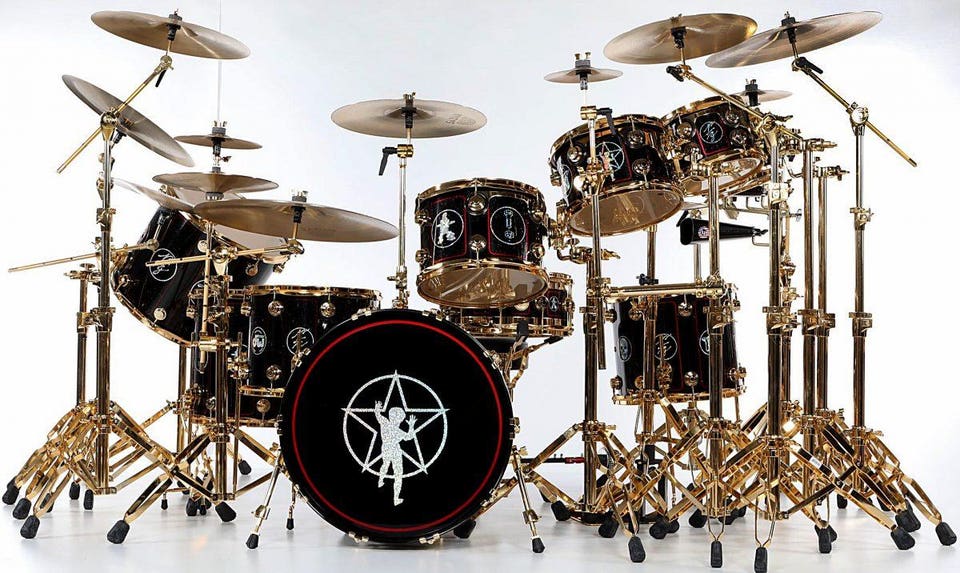 Do you remember the first drum kit you ever owned?

Frangioni: My first kit was a Rogers that my parents bought used. It was a pink champagne four-piece with a cow bell and a couple of cymbals. I had been taking lessons for a couple of years on phone books, playing the yellow pages. My parents saw that I was serious about it and got me a real kit.

Singer: My first kit was a blue sparkle Dixie, which was made by Pearl. Ironically, because that's what I've been playing for the last 32 years, is Pearl drums.

A drum kit's not only a big investment of cost, but, it's also the space that it's gonna take up and the noise that you're gonna make. Once my parents realized I was all in, they got me a bass drum and a snare. The next year they bought me a tom-tom. The following year my dad bought me a Rogers, same as David, a silver sparkle kit. That was is 1972 for my 14th birthday. I still have that set to this day.

Material possessions represent time frames and periods in our lives that are very important to us. Just like music and clothes, our musical instruments can remind us of our youth. 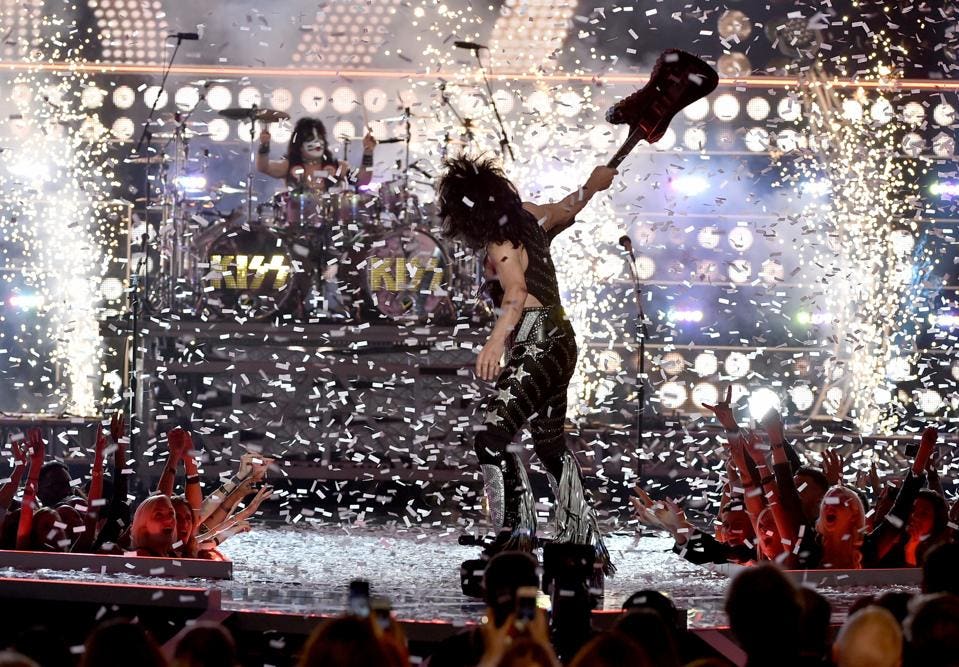 Eric Singer and Paul Stanley of KISS perform onstage at the Barclays Center in Brooklyn, NY, 2014

Eric, what kind of drums can we expect on the upcoming KISS farewell tour?

I thought, "What is the most typical looking KISS kit?" A disco mirror ball looking finish, that's the ultimate kit for a band like KISS.

Paul [Stanley] always said to me, "That's the best kit you ever had!" It typifies that 70s glam look. KISS has always been influenced by the whole era. Paul had cracked mirror guitars and rhinestones. He loves that look. If Paul Stanley was a drummer, that's what he'd be playing.

Depending on how long the tour lasts, I have a couple ideas up my sleeve. This may not be the last and final kit. I don't think it will be.

View this Article on Forbes